At last Save Civic Hall has had a breakthrough. Ammon Beyerle of here studio will lead a new process where everyone will be invited to contribute ideas and plans at “open door studio” workshops.

The process starts with an exhibition of “300 concepts”, drawn from all previous consultations. After workshopping and discussions with artists, young and established architects, children and the general community, these will be reduced to five concepts. This should surely then enable Councillors to finally make up their minds about the future of the Civic Hall and its site.

It has been proposed that the workshops will be held in the Civic Hall foyer. That in itself is interesting. Council had initially protested that the building is in too poor a condition. Now it is generally agreed that it is structurally sound and could easily be at least partially opened for this process!

The Save Civic Hall group is delighted to see, at last, light at the end of the tunnel! 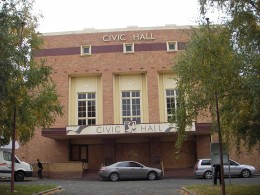