The Stick Shed at Murtoa is a space I’ve been in love with since I first illegally entered it in the 1990’s.

Horsham Art Gallery’s patron, the late Mack Jost OA, was another to sneak under its walls and be overwhelmed by its grandeur. It was Mack who told me it was bigger than St Peter’s Rome. And he did a no-tech sound test on its acoustics using our voices! (Marvelous reverberation).

We tried our best to save it from demolition back then, and finally, due to the persistence of locals such as Leigh Hammerton, it has been restored. Now, it needs a use.

Check out Leigh’s website and get in touch if you have an idea. eg Art is… festival wanted to have a large-scale performance piece/dinner party that rolled out down the central aisle). At the time. we could not get permission. Now it looks as if it’s possible. 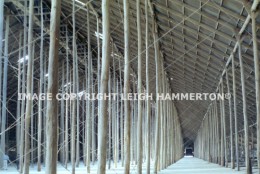