The Boy from Oz with the Opera Boys

Musicals are “not my thing” (blame Light Co’s Mikado of 100 years ago!)

But how could you not enjoy a night out with The Opera Boys (Lionel actually was a Boy from Buninyong – and made a huge contribution to raising the fun & excitement levels when here). And, by the way the show absolutely abounded with energy, which has to be good for the soul!

To my ears the voice of the human dynamo leading man (Andrew Ronay-Jenkins) was a touch harsh but in every other way he was superb, and it wasn’t surprising to hear that he lost kilograms rehearsing for this show.

But I fell in love with two other members of the cast – First, Uisce Goriss-Dazaly as the young Peter Allen – gosh this kid has everything. Even assurance and … niceness when pounced upon by me after the show!! If I was a follower of musicals I’d be watching out for the rapid escalation of his career.

And the young & luscious Sophie Livitsanis played the aging Judy Garland with total believability and a beautiful voice (best in the show).

For news of other productions by Leading Note Theatre & BLOC. 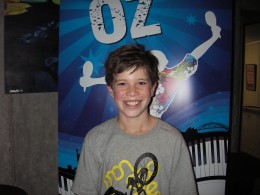